Money doesn’t grow on trees, but it can sprout up through the humus of old piles of stuff, and when it’s ripe, you pick it.

My son finally cleaned up a teetering pile of paperwork stashed in a corner and a crisp $20 bill fell out of an old birthday card.

I hope he thanked whoever it was at the time, because he did the Happy Dance for a solid half hour before it burned a hole through his pocket.

And once in a while, I find five dollar bills in the pocket of my jeans. Usually it’s only a couple of bucks though, because, debit cards.

Last week’s search for a photo turned into this week’s discovery that I had a few prisoners left in the Jumanji box.

There actually was an old savings bond in that stack of memory mulch and it had secretly ripened four years ago.

I won it in 1982 in a county-wide writing contest with an essay titled “How the Declaration of Independence Affects Me Now”.

In 1982, the Declaration of Independence affected my grades.

In 2016, it’s gonna be my national treasure…all the way to the bank.

If you have ever acquired a savings bond and stashed it away to “mature”, go dig it out and take a look at it.

Like wine, they have a time limit. You can only stash it away for so long, and then you’ve got vinegar. Mine is a series EE and after 30 years, it has all the interest on it that it will ever get.

I looked it up, and so can you: there are millions of dollars of savings bonds going UNCLAIMED because everyone stashed them, forgot about them, or don’t realize that they are as good as they’re gonna get.

Dare I say it?

It’s time to scythe through the jungles of your house and find your own ancient relics.

The contest people paid $25 for it at the time.

Of course, it was made out to Miss Jolie Maiden Name at her original teensy house in the hood.

But Mr Roosevelt himself is next to it, and he’ll vouch for me.

He was there and witnessed it all.

And he took it seriously, watching me open and close the lid for over thirty years, playing his part in the game. 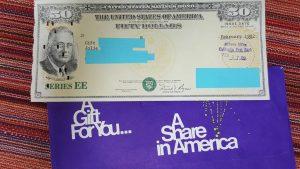 Unlike a certain award-winning writer, he hasn’t antiqued a bit.