Dusting Off the Imagination

Jan 17,2017 4 Comments on Dusting Off the Imagination art, creative thought, imagination, my childhood

When I was a child, imagination was my biggest and best toy.

That’s because before Tiger Moms and internet, there was The Backyard.

All the cool kids had one.

I climbed up the rickety stairs over our garage and could just make out Dead Man’s Island off the San Diego coast. Its hills form the perfect outline of a body floating face up.

In my mind it was full of cannibals or wild animals or pirates. Someday I was going to go there in a rowboat and dig for treasure.

I would lie on the floor in the living room and pretend gravity had reversed. I ‘walked’ around on the ceilings from room to room trying to decide how I would make lunch or avoid light fixtures, and stepping over the doorways. You couldn’t go outside of course, unless you were swinging along the fence top.

Once outer space got you, you were doomed.

If you look at a door and can imagine a hundred ways that door could be different, your imagination is working, too.

Will you look forward or backward? 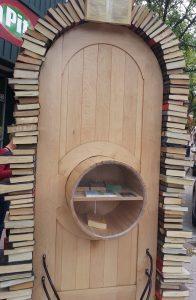 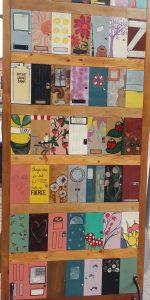 Every door leads to another door…which will you open next?

A person with a wild imagination and the ability to express it is a person living a very rich life. Whether in words or fabric or gymnastics or music, with flowers or a blowtorch, the release of the thing within his heart creates beauty.

In all fairness, an imagination is not easily harnessed and can, on occasion, take you on journeys unexpected. If it frightens you, you could be tempted to close the door on it before understanding what it was trying to say. If it fascinates, you could be pulled into its vortex never to be heard from again, endlessly wandering among the paint pots.

If your child enjoys the wrapping paper as much as what it contained, her imagination has doubled your gift.

Watch this child. She sees the infinite possibility in things.

Or, you know, she could just be weird.

I may be the only child who ever sat and played with dust motes, but I doubt it.

Perhaps I am the only one who will admit it. (There’s always the comment box below if you feel inclined to share.)

On a completely empty, uneventful, and deliciously boring summer morning I sat on the living room floor, staring through a sunbeam.

It came slanting in through the window and wasn’t going to stay long. For whatever reason, I slapped my hand onto the carpet and watched a large puff of dust swirl up into the air.

You could only see it in the sunbeam. Beyond it, the air appeared perfectly clear.

I watched them swirl as my hands passed around them, riding air currents. Another slap to the floor, and the sunbeam was thick with dancing specks.

The first thought was simple enough: snowflakes. This must be what it looks like when snow falls. At least, it did in my swirly snow globe. I did not see snow actually falling until my 30s.

The next thought wasn’t nearly as nice: Whoa! I’m breathing that! Every inhale is putting these little guys in my nose, down my throat and into my lungs! I can’t even see them and they’re getting into my mouth!

I dashed outside, deep breathing the fresh air and wiping at my eyes and face.

I gave a little cough, just to clear things out.

That was a close call! I practically suffocated on the living room floor!

The next morning, I gathered my two little sisters around the sunbeam.

They watched as I made the specks float in patterns.

And then I fulfilled the eldest sisters’ duty by carefully explaining that this was what formed all of the boogers in their nose.

Also, we played in The Backyard for the rest of that summer.