Italy and The Joys of Gelato

Nov 10,2018 2 Comments on Italy and The Joys of Gelato flavors, gelato, Italy, vacation

Not all gelato is created equal.

Hubby and I scoured the length of Italy to tell you so.

As a matter of fact, you cannot walk a Roman city block without tripping face first into three different gelato displays and as tempting as it is to eat your way through Italy with a cucchiaio or palletina in your hand, you need to know the “Good” from the “Great”.

“Good” will have a small case of flavors, ten or so basics, tucked into a larger establishment like a restaurant or souvenir shop. “Good” gelato is made in a factory from sullen cows with whatever ingredients are handy.

“Great” will have a wide variety of flavors, twenty at least, in a place dedicated only to this frozen delight. It will have over 150 if you’ve arrived in gelato Nirvana…which exists in Rome. Maybe it has won major awards for deliciousness in Sorrento. It will say “gelateria” over the door and have a bonafide gelato party going on inside. 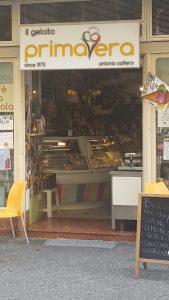 You have arrived at your destination.

“Great” gelato is crafted from the finest fresh ingredients from someone’s secret family recipe that Nonna left under her pillow. Each artisanal flavor will be piled into tall fluffy mountains of joy with bits of the ingredient tossed on top. ie: the pineapple gelato will be wearing a pineapple crown and the walnut gelato will be studded with walnuts. They branch out with lighter sorbets, too, just to mix things up.

The chilled pan of noccioloa will be half empty because the Master Gelatieres can’t stop ‘sampling’ it for quality control.

This place is taking gelato as seriously as you are and that’s  Great. 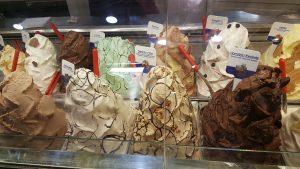 Next – always choose a cup, not a cone. Don’t be that guy with the cone we watched over and over, veering into the middle of the street trying frantically to lick his gelato into submission and losing the battle. You will find him later in the baptistry – sprinkled in holy pistachio. Marked by his dedication.

Now for the best part: Choosing your flavors. Begin slowly, don’t hurt yourself. We began with single flavor starter cups and worked our way up to professional level with three for four flavors at once. This allowed us to sample sometimes eight flavors at a time, because sharing is caring. Also, this is how you discover that lemon and chocolate go surprising well together in a single lick. My absolute favorites are the pear and the fig. The flavor is rich but also subtle, with bits of dried sweet pear or fresh fig swirled into the gelato. Unusual and delicious.

Here are the flavors we tried:

Peanut (not peanut butter sadly, but more like a raw peanut ice cream)

Mango (basically you are just eating a chilled perfect mango)

If you have thoughts on gelato, by all means, put them in the Comment box and join the party. 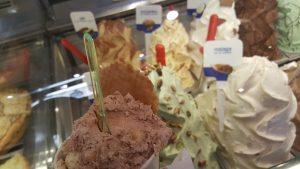 Let’s get this party started. All mine…plus a cookie! 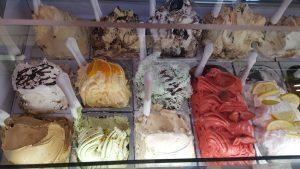 On Every Street Corner 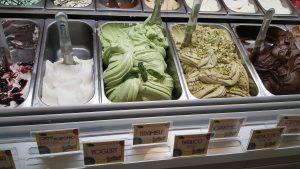 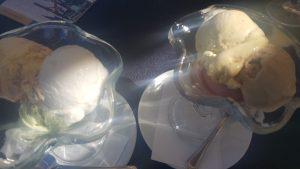 Top of Anacapri, treats for the brave