The Aunt Ruth Reunion, as we call it, is written on the calendar for the last Saturday of every August, and woe to family members who neglect to observe it.

“You know, we’re getting too old to organize this event. It’s time to pass it on to the young-uns.”

Your absence may be noted over Thanksgiving dinner but if enough pie sits on the sideboard, it will be forgiven. Skipping out in August however, implies you have not made the effort to sit in the shade with Aunt Ruth and Uncle George with a glass of iced tea and chat about everyone else who didn’t make it. 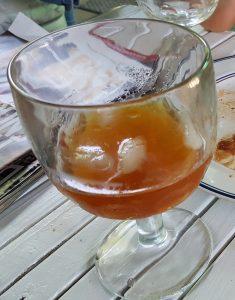 “These goblets came from Alabama. I stopped to see a house I used to visit as a child, and they had turned it into an antique shop, and there they were, just like the ones my grandmother used.”

Aunt Ruth, bless her heart, understands that life can get busy and will include you in her prayers later tonight, but the rest of us – those who brought potato salad and cold chicken and frisbees and teenagers – will wonder just what has become of our family tree. The paperwork says we branch out in many-splendored directions, but it felt just a little like a bonsai yesterday.

We were such a small bunch that we elected to visit our elderly kinfolk right in their home, instead of Mission Bay where we usually meet. It saved on the hauling of tables, chairs, potluck food, coolers, water toys, towels, and other flotsam.

“When I was a child, our reunions were held in the pasture. Cousins were stationed all along tables covered in cloths, and as the food came out, they kept the flies moving with flyswatters. You wanted to watch your step out there.”

We laid out the food in her tiny kitchen and sat on the back patio, surrounded by her thriving gardens and plants, trees and flowers. She has a green thumb.

“Well, I can’t wear green. It’s not my color I guess. But if I set my pots to soak overnight in Miracle Grow, they just wake up in the morning so sassy! Be sure and take some figs home with you, the tree is full.”

“The fabric was just going to waste. Someone may as well get some use of it.”

Over the years, I have pieced bits of her life together. I know how she met George one fateful day when he walked into her office.

“I decided I was going to get that man to ask me out, so the next day, I wore a swishy skirt and just walked right on past him. He got the message.”

We all celebrated their 50th wedding anniversary at the Bali Hai, where her words of wisdom inspired me to stop playing in jello. This December, they will have their 65th.

“What will I do?” she says with a giggle, “Why, sit on his lap and thank God for living this long!”

Aunt Ruth has four children (“and we lost one early on, you know”), eight grandchildren, a dozen great-grandchildren, and nieces and nephews and little children off the street in all directions and can tell you how they were doing last she spoke with them, and she just loves them dearly and blames her two knee replacements on a lifetime of praying her loved ones home.

“Every time I see your daddy, he’s just this sweet little three-year-old boy in curls and I thought to myself, this family makes the cutest kids, I just have to marry into it!”

My two teenage boys got a history lesson that ranged from the depression to the murky future. They listened to their grandfather tell stories of his own father who was a plasterer.

“You can’t use that word,” interjects Aunt Ruth, “You’ll have to say he worked his donkey off.”

From there, the conversation heads backwards, covering family members in ever-widening generational rings, the good, the bad, the ugly and the interesting. Uncle George fills in.

“Now, there was a sweet lady. She always tucked a penny into a handkerchief and sent it home in my pocket, but my dad never let me go buy candy with it.”

First homes, first cars, high school sports and donut runs. Some things are very familiar to my boys and some things are a riddle. Everyone contributes a memory.

“After the depression, he never trusted another bank. He would fold up bills and tuck them into the armrests of his car or under the hood. We found a wire sticking up from the dash once and pulled up more money.”

“After a while, I started asking questions. Turns out he was a shady character. The more I got curious, the more I found out what he was hiding, and I quit. He disappeared into Mexico and I never saw him again.”

“When I found out I had a brother, I was so excited to meet him…but he didn’t really want to meet me. He wouldn’t answer questions I had or help me learn about the rest of our family.”

Aunt Ruth straightens in her chair.

“Let’s just let those poor people go. That’s why we started this reunion in the first place, because people just don’t know who their family is anymore. There’s something there that shouldn’t ought to be. I wasn’t brought up that way. If kinfolks are coming to see you, it’s a reason to celebrate! I’m going to do the right thing, no matter what anybody else is gonna do. Now, we have a lot of family missing today that I would dearly love to see, but they won’t be seen. They’re out doing what blows their hair back, I guess. But I’m just going to sit here and love ‘em all the same.”

My little life agenda blows away on the San Diego breeze, as strong deep Alabama roots intertwine with those from Minnesota and tunnel all the way to the Pacific. The saplings sit beneath mature established old-growth, harvesting the wisdom of experience. Whispered truths from the overhead canopy drift down, telling the past and seeing far into the future, undisturbed by the rustling on the forest floor.

“Everyone eat up,” interrupts Aunt Ruth, “the pudding’s going begging.” 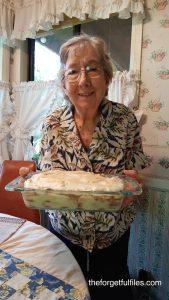 Alabama Banana Pudding in the Pasture

over low stovetop heat, stir mixture constantly w/wooden spoon until it thickens
keep the mix below a boil; it’s thick enough if bubbles start up
stir in 1 tsp vanilla
remove from heat, put a lid on to prevent a skin, let custard cool

in a glass baking dish, layer custard, vanilla wafers, and banana slices until used up

in a clean, dry bowl whip 3 egg whites with a shake of salt
slowly add at least 1/3 c sugar while whipping, until melted in
once it’s setting, add 1/2 tsp vanilla

spread meringue over top of pudding 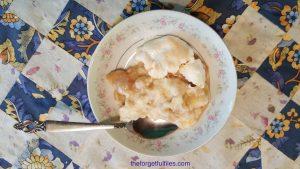