Legend of the Boom Boom Stick

Back when I was a kid, my sisters and I got into the usual amount of mischief. Well, as much mischief as you can get into considering we weren’t allowed to leave the yard.

There was the time we decided, one end-of-July summer day, that all the tomatoes in the garden ought to be used up as ammo for the World’s Biggest Tomato War.

But it wasn’t okay.

My parents were traditionalist “spare the rod, spoil the child” types, and discipline played out in an invariable routine when mom had had her fill.

“Just wait until your Father gets home!” she’d say.

And we’d go into hiding for the afternoon.

That night, Dad would come striding into the tiny house and get the daily report, and we’d linger around the doorway, holding our breath and waiting to see if Mom was really going to tell on us.

Sometimes she would let it go, and we were eternally grateful.

For at least two days.

But if Dad started taking off his belt, we scattered. He seldom had to do anything but that to get the message across.

If one of us did get a spanking, the others would all cry along with her.

When I became a parent, I was determined that I would discipline for myself, on the spot.

And I would never, ever use a belt on a child.

My mom’s weapon of choice was the wooden spoon from the kitchen but it was used only as a directional baton, like an ineffectual flyswatter.

It shooed us away, but we always buzzed back.

My two (older) daughters tell me regularly that my two (younger) sons are spoiled rotten.

Their basis for this judgement is the amount of times they’ve actually seen me spank them compared to the times they recall being, themselves, swatted with a wooden spoon.

Apparently, the Legends of the Boom Boom Stick are many.

My children inform me that they spent many childhood hours thinking of ways to defeat the Attitude Adjustor. They knew that wearing their toughest denim jeans was always a good idea.

They put books down their pants.

They thought that if they could only put jello into the proper mold, mom could hit it and think it was an actual bottom being reprimanded.

They snuck into the kitchen and broke wooden spoons in pre-emptive strikes.

They had spoons break across their bottoms which just goes to show, they don’t make ‘em like they used to. Spoons, I mean, not bottoms. I figure those are about the same.

Back in the day when I had five little rascals I can tell you there were days when I was grateful to have the Spoon of Power. It gave just enough sting to remind everyone who was still in charge, and no, you can’t go into the garage and rearrange all of the fishing gear into a fort because I don’t want the baby to eat hooks.

For the seventh time this morning…

Swats were necessary for the dangerous things or the deliberate belligerent ones, but it doesn’t stop kids from being kids, and when things are really going south, you can’t catch ‘em all.

But time outs are the best thing ever invented.

I used to stand my kids in the corner. Sometimes I had to use up all the corners of a room at once.

I would put their finger on a spot on the wall and say, “Don’t move your finger until I say so”.

But they were still fighting each other with everything except their one finger.

We switched up to putting noses on the wall.

You want to set the timer for one minute per year-old of the child.

I just round mine up to an hour and send myself for a nap, to make sure I’ve learned my lesson.

Everyone grew up. Everyone started to behave themselves a bit more each year, and frankly, I got just too tired to bother. Either my sons get into half the trouble my daughters ever did, or I am ignoring twice the things that used to be “rules”.

Mothers do the best they can with what they have on any given day. Somewhere between kids, my discipline style evolved, I understood kids better, I realized how fast they grow and learned what did and didn’t actually matter.

Once in a while I rattle the spoon caddy in the kitchen to see if anyone’s instincts rise to the bait.

And I’m curious to see if my kids will tell their own kids some day “Stories of the Spanking Spoon”.

It always begins, “Back when I was a kid…” 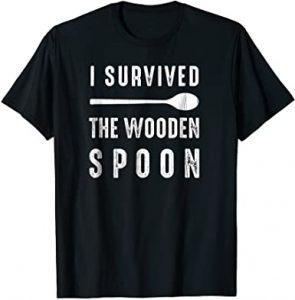