The Loveda Brown Mystery Series, pulled from history and colored with crimes. Set in Idyllwild, California in the summer of 1912, the old ways of pioneers and the migratory Cahuilla butt up against the influx of modern inventions and American progress.

Subscribe to the Newsletter and come along for the ride as Loveda Brown falls in love with this small town in the heart of a big mountain. 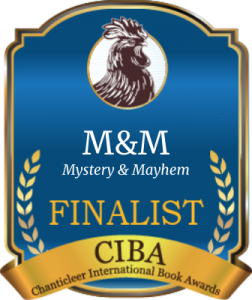 Reader’s Favorite gives it 5 stars and says,  “Moving at a blistering pace, the plot keeps you hooked with its unexpected twists and turns, and you can’t help but turn the pages in eager anticipation of what’s to come… Any reader who enjoys westerns or a well-written murder mystery will find The Great Loveda Brown a thoroughly entertaining reading experience.”

Scroll down to read five-star reviews from readers who fell in love with Loveda! 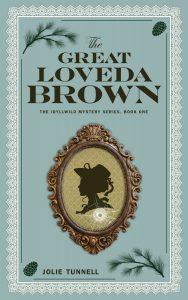 The Great Loveda Brown, The Idyllwild Mystery Series, Book One

When Loveda Brown arrives in the tiny mountainside town of Idyllwild, California, as yet the Wild West of 1912, she is running from her husband. But when a body turns up the next day, she realizes she might have worse things following her… that cold, clenched fist holds something that forces Loveda to stay in Idyllwild and use all of her wits to stop another murder from happening. Probably her own.

Loveda Brown thinks she’s running from her hot-tempered husband, but a hidden killer in the tiny town of Idyllwild has other plans for her.

“What a marvelous mystery, full of emotions and intrigue, history and romance, beauty and sadness, all rolled into one exciting tale.”

“I like ‘em cozy and smart, with independent female characters and enough clues I can figure out whodunnit, but it’s not easy!”

“This was such a fun book!”

“Loveda is my kind of woman… lots of gumption!” 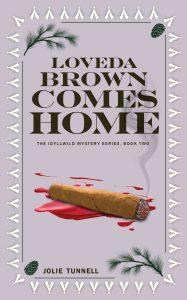 Loveda Brown has inherited more than a tiny hotel in Idyllwild, California, as yet the Wild West of 1912, she’s inherited trouble. A pretentious lawyer, a Boy Scout troop invasion, insufferable suffragettes, and a pair of pompous honeymooners are about to interrupt her best laid plans. Between murder and a kidnapping, the pressure is on for Loveda to clean up the town she longs to call home.

Loveda Brown inherits more than a tiny hotel in Idyllwild, she inherits the guests that come with it and the killer walking among them.

“Witty and intriguing story with lots of twists and turns. Keeps you hooked until the end.”

“I can’t wait to read more of her books!”

“I can only tell you its funny mystery because anything else would spoil the story. Loved reading this book. Anyone who likes a good western cozy mystery must read this.”

“This is a fun read with a mystery, a plucky heroine, numerous potential suitors, a troop of boy scouts, and a struggling hotel in 1912 California.” 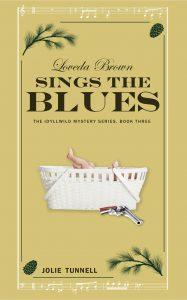 When opera singer André Bernardi arrives in the tiny mountainside town of Idyllwild, California, as yet the Wild West of 1912, mysterious accidents follow him. Can Loveda Brown prevent his murder while fending off the advances of a passionate artist, and will a zealous paleontologist dig up more than he bargained for? A shocking package on the stagecoach could hold all the answers.

Loveda Brown must save an opera singer from his lethal pursuer, but a tangle of masculine admiration has her singing the blues.

“What a woman! What a story! What a wild night in Idyllwild!”

“A final scene that makes a Puccini opera finale look like a hike in the mountains. Excuse me while I go read it again.”

“A great plot that keeps you guessing right to the end.”

“All books in this series are fun, quick reads. Definitely recommend!” 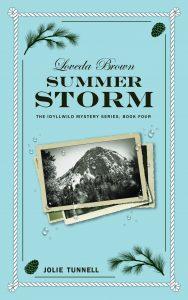 In the tiny mountainside town of Idyllwild, California, as yet the Wild West of 1912, Loveda Brown’s guests stir up a perfect storm. One has a secret, one has a plan, and one has a grudge worth killing over. As she unravels the truth, Loveda must betray the people she loves in order to protect them, and nothing less than a local legend can light her way to redemption.

A train robbery gone awry catapults a gang of outlaws into Idyllwild where they settle on a new target.

“It’s exciting, full of mystery and adventure with a strong independent heroine, hard to put down.”

“A fast-paced story line that keeps you entertained as you try to figure out who the murderers are and why.”

“I would recommend this book to any cozy mystery fans who like Western story.”

“This book is wild and so much happens… must read!” 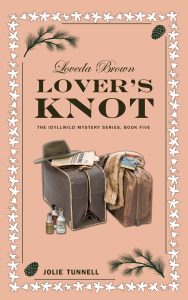 Loveda Brown is a bridesmaid in the tiny mountainside town of Idyllwild, California, as yet the Wild West of 1912, but with the wedding only three days away, a guest drops face first into the chicken salad. Is it misdiagnosis or murder? Between a fortune teller, a nosy reporter, four physicians, and an overbearing aunty, Loveda wanders a maze of deceit to uncover the killer before the bride pays the ultimate price for a secret in the groom’s past.

An Idyllwild wedding is threatened when visions of the future are clouded by secrets of the past.

“Loveda Brown, Lover’s Knot is the fifth book in a series but can easily be read as a standalone. Although I had not read any books in this series before, I was easily swept into this novel, with its quirky cast of characters and compelling storyline. Loveda is a strong woman at a time when men ruled the roost, and she is quick to sniff out a mystery. When a woman dies under suspicious circumstances, Loveda is not content with the explanations of the men present and sets out to investigate for herself. Full of fun, intrigue, twists, turns, and even some fortune-telling, this book will keep you entertained. I found the writing to be exceptional. It grabs you and takes you on an adventure that can be both humorous and perilous. I felt transported back to 1912 to this tiny town in the west. Will I seek out the rest of this series to read? That’s no mystery. You bet I will.“ 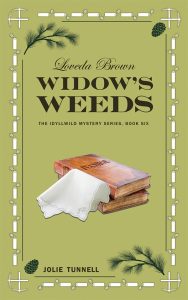 Loveda Brown discovers a dead man on the banks of Logan Creek, near the tiny mountainside town of Idyllwild, California, as yet the Wild West of 1912. Then it disappears without a trace. Unexpected guests sweep in with devastating secrets in their wake, forcing Loveda to confront a secret of two of her own. Will she find the killer before becoming a pawn in a sinister game of death and resurrection?

Three women conceal secrets beneath their widow’s weeds, but Loveda’s might be the biggest of them all.

“The latest Loveda Brown mystery is the wildest, most dangerous, violent and unpredictable of the entire series. Makes a horse-drawn buggy ride over Idyllwild’s rutted roads seem like a bed of down. Loveda has to deal with bad guys and bad women, con men and con women…! Her trusty Colt 45 is never far from her hand—though more than once she wished it were IN her hand…Loveda’s life is forever transformed.”