Meteors, Grunion, and Other Unicorns

I’m lying on my back on the new outdoor deck we built this year (by “we”, I mean “Hubby”), staring real hard at the night sky. The Perseid Meteor Showers are on this weekend because my recurring calendar says so, and after years of trying to locate it, I have to say, “Bah, humbug.”

Not in the Star Wars fantasy that I’m imagining it to be. I’m expecting a version of lightspeed proportions and the stars are just sitting up there, laughing at me. And that’s okay. The air is cool for August and the little chorus of frogs in the creek have gone to bed, replaced by the occasional screech from an invisible owl. The kids, knowing full well that they can’t control the heavens via remote control, went to bed and I feel a little disgruntled only because these are the same guys who insisted that grunion are worth staying awake for.

And grunion aren’t real, either.

A grunion run by the light of a full moon, traced by following Instagram commentary at 1am on a warm summer night, is a fun way to entertain guests. These elusive little silvery fish swarm random beaches to spawn and if you have a fishing permit, you can catch the buggers by hand and put them in a bucket. What you are supposed to do with them next is anyone’s guess, but it doesn’t matter, because no one buys a permit because no one is ever going to find a grunion, let alone touch one, and you spend the wee hours of the morning running from beach to beach with a flashlight and end up at an IHOP getting coffee because it’s the only thing open.

Is that a meteor? No. It’s an airplane. It must be lost. Could be a satellite, maybe.

When I was a kid, I sat up one Christmas Eve, staring out the window, desperately trying to convince myself Santa was real and knowing full well he wasn’t. But, presents. So when a plane went by, red light blinking, I said, “Well, there you go, he’s on the job.” And that would’ve been that, except for after another couple of minutes, an actual UFO went by, defying categorization, and years later, I wonder if it was a Stealth Bomber. I mean, we’re in San Diego.

It’s as possible as the owl that just crossed overhead, a deep black shadow beneath a paler black sky. Massive, silent, beautiful.

Not Santa, so much.

I had a conversation with my kid in the car the other day, and mermaids came up, purely in a scientific way. I mentioned that it was more possible that unicorns were real than mermaids and proceeded to explain the whole lung vs gills issue, followed up with what I thought was an obvious flaw in the system: they must be a fish and only mammals have hair. A real mermaid would have gills, no hair, no nose, and bugging out eyes on the sides of a flatter head. Maybe we’d driven past a Starbucks. The image wasn’t pretty.

This is why my kids don’t hang out with me.

There. That had to be a meteor. It went by fast, over there, in the corner of the sky where I wasn’t really watching. But something moved. Or I blinked. It could have been a shooting star. Oh, whatever.

But a unicorn, that works for me, because my daughter does the tours up at the Safari Park and everyone knows that the scimitar oryx has the body and horns of a unicorn, when it turns sideways, just so, or maybe loses one horn in combat. I’m pretty comfortable with a unicorn myth.

Well, it’s so far past my bedtime that I should start my morning laundry. My back and neck are getting tired.

Wait. What was that? Over there? Oooooooooohhhhhh……… 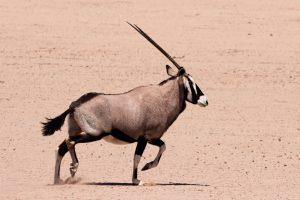