Otherwise Known As The WAP

The small child looked directly at my girlfriend’s butt.

“Is that a spider on you?” he innocently asked.

It was a situation that, on the surface, called for an immediate break dance maneuver and the “Get it off me!” song sung a cappella.

Except we were standing with ten people and a stroller, in an elevator meant for six.

These are the kinds of memories that come to me when you suggest a visit out to our family’s “go to” tourist spot: The Wild Animal Park, aka: The San Diego Zoological Society that Changed it’s Name to Confuse Us.

By calling it a “Safari”.

Now, you can buy a safari that drives out among the rhinos, one for zip lining over antelope herds, one for hot air ballooning over the lions, or that mazes through treetops over *gasp* tourists.

My kids grew up on the monorail out there. You could entertain school kids, let the toddler nap, and nurse the baby all at once. You got a nice breeze, no one escaped, and if you were lucky, the giraffes would play tetherball with each others’ heads.

The ancient monorail finally bit the dust one night, leaving tourists to wend their way back to civilization on foot (I would pay serious money for that safari), and now you can see Africa and Asia on the safari tram, same perks.

So…ask my family for a private safari tour, and you will be shown things that were never marked on the map.

Sure, you can see the lions mate and the tigers stand eye to eye with your snack-sized toddler.

You can watch the gorilla troop wrestle and climb and pee off the cliff.

Yes, you can pay to feed the lorikeets while they land on your head and poo in your purse.

But did you know you could feed the giant catfish down by the flamingos?

You spend a quarter on a fistful of duck kibble and walk to the shady edge of the wooden bridge. As you toss it, the ducks come swarming. Within a minute you notice that the water is beginning to boil, and from under the ducks bob the massive heads of four-foot catfish, all fighting over the food.

We waited years for a catfish to swallow a duck by mistake.

I guess it’s BYO for the catfish safari.

Stand with your back to the fruit bat exhibit *shudder* and look at the boat structure they added for restaurant seating.

Notice how it sits in a dirt area?

If you remove the boat and the dirt, you will have the original concrete swamp that used to hold their white alligator.

Before that, it was the elephant wash.

There was a time when you could watch keepers lead elephants to the empty pool and hose them off on a summer day.

Obviously, this prime real estate was needed for you to eat your french fry safari on.

You could walk over to the low rock walls that now surround the butterfly exhibit, and that was the line for the elephant rides. And camel rides. There was a burro in there somewhere.

Somehow, the carousel safari isn’t quite the same thing…

Also on our list of “things you must see” is Max.

Not Max the Emu, he was one of my favorites at the old bird show.

He would run between two keepers, taking a bite of kibble, over and over again.

“This bird’s eyes are larger than his brain. He doesn’t even remember where his bedroom is. In his own mind, Max is very popular. He makes two new friends every time he comes on stage. This is Max the Emu…and this is all he does!”

That poor bird was determinedly optimistic, and just like him, I always have the feeling that I am meeting new friends. Friends who love me and want to share their kibble.

Okay, maybe there’s something familiar about their face…and they seem to know me already.

But that’s never stopped me from being just so happy to be a part of whatever the heck is going on.

The Max I refer to is a salmon crested cockatoo that sits, today, at the back of the Plant Trader. Max is an old man, even in bird years, but anyone who has ever been greeted by Max in the past goes looking for him first and last.

He talks and whistles and can carry on like a flamenco dancer; he throws kisses to the ladies.

Never go into the petting kraal. The animals pet you back.

That includes lorikeet landing, lemur walk, cactus gardens, and the geese in the lagoon loop.

An okapi is a velvet giraffe who met a zebra in a bar once.

Smuggling a spider home: no.

Not on your butt, anyway. 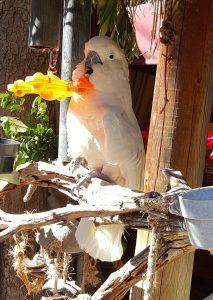