Confession is good for the soul.

Fairly rotten for the backside, if you’re being raised in a spanking-type house, but still, it feels good to get it off your chest so to speak.

I haven’t seen the inside of my gym for a month and a half.

I think it’s the longest I’ve ever gone AWOL and my soul, backside, chest and other random anatomy bits are all the slightly worse for it.

My new fasting diet at work is helpful, of course, but there came a day this week when I simply had to get off my nantucket and move. And not indoors, I wanted sunshine and fresh air.

I came home from work, tossed on my tennies, and headed for the trails. Five minutes into the walk, I was on the phone with a girlfriend, because I’ve also been a little AWOL with my peeps. Then the Hubby called. I may have some catching up to do in my life. My poor mom probably thinks I’m dead.

But hey, we all went for a walk together, so there’s a start.

Every once in a while, I noticed tracks in the dusty trail:

Everyone in SoCal knows what this means, and as I chatted I began scanning the immediate area with growing concern.

There was another one every quarter mile or so.

A couple thin, erratic tracks could have been baby hypodermics; every twig was suspect. “Babe,” I said into the phone, “I gotta go. Need to do some jumping jacks.”

Somewhere in the last month and a half, I must have blinked because summer was here and with it, snakes.

These tracks were made by grand-daddies. Recently. Like maybe five minutes ago.

I was nearing the end of my route when I came around a bend in the road and  had a cardio event. The western diamondback wasn’t crossing the trail in a leisurely loopy way. He was motivated. He was hunting. And I was suddenly between him and his destiny. He came toward me for a moment or two, but sensing that I was one with Nature  about to play Run and Scream, he continued across and up the bank.

Can you see him? I was almost three feet away before I realized the dead grass/dirt combo was slithering. That is some serious camo. I whimpered while waiting for a chance to go home and hide under the bed. He made me writhe, tolerate, endure his superiority for-agonizing-ever.

The minute his business end went into the chain link fence, I started edging my way past.

He stopped and gave me a withering, backwards glance. “Coward,” he seemed to say, “had you been running instead of posing, we would have had a different encounter altogether.” 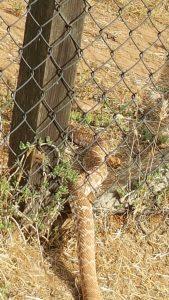 “Yes, yes,” I babbled to him in my head, “don’t I know it. I’ll go back to the gym and stay there! yoga stretches and a cooking channel hour, honest! I don’t even like fresh air!”

Realizing how close I’d come to death by exercise, I covered the last of my 5K like a wary ninja, scanning the trails, peering into brush, startling at every rustle, my cell phone weapon ready.

This little guy popped out and I almost karate-chopped a dead pine tree in my haste to not be physically touching the ground. When I climbed back down, he was still there, pretending to be part of the shrubbery.

Nope. Sorry little dude. You are definitely in plain sight, and the rattler is definitely going to swallow you up whole. I tried to carry him home with me, but hares aren’t known for their brains in the way that keeps them from being way down low on the food chain.

This was the last track I found before completing my workout with  finally kissing the civilized asphalt:

I want to believe the gopher plugged up his hole when he saw doom slithering his way, and the snake was stuck eating salad for dinner. And I don’t even like gophers.

Please. Let’s none of us tell my mother about this.