Like fish and company, touring new cities begins to stink after three days. We filled our days to the brim and left while we were still having fun.

Another travel maxim is: you cannot possibly see it all. Rome wasn’t built in a day, you know. It has layers. Three days forced us to prioritize The List into something manageable. As this was not our first rodeo, we also took into account a little regular down time and things out of our control like jet lag, weather, or mood swings. If gelato sounded better than climbing the campanile, then we had permission to rebel.

But usually, we did both. Simultaneously.

Today, I wanted to begin at the Galleria Borghese, but I had not booked this museum ahead. I read that you could go early and try for walk-up tickets, so although the website said “Sold Out”, I was hopeful.

Now, a hotel concierge is a fabulous resource and I recommend asking them all of your foolish tourist questions, even if you aren’t technically staying in their hotel. In Rome, ours was “George from Venice”, who was very helpful when our electricity converter wasn’t working. George opened a drawer and pulled out a dozen different types that didn’t match and finally sent Hubby across the street to buy a new one. Meanwhile, I told him my plan for sneaking up on the Borghese. George frowned. He didn’t recommend it. He called the Gallery, speaking in rapid Italian. “They are sold out completely until two weeks from now,” he said. “Yes,” I explained, “but perhaps if we show up in person, they will have room.”

George talked us out of it. It wasn’t until Florence, when we snuck up on the Accedemia and won, that I realized George just didn’t want a screaming disappointed tourist in his face later, so I guess I don’t blame him. My asterisk is that if you want to gamble, don’t involve the concierge.

Instead, we opted to follow Rick Steve’s Heart of Rome Walk, beginning at Campo di Fiori. I had already downloaded his maps and tours into my phone and although Hubby is not a fan, he went along with it, choosing to let me listen and guide him through town. Campo di Fiori is a beautiful little morning market selling flowers, veggies, and the daily bread. 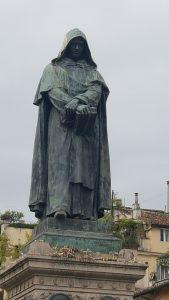 Rick was telling Bruno’s story when Hubby decided there were two more men in my head than he was okay with. Rick and Bruno had to skip to the end and direct us forward, and it wasn’t until the train ride from Rome that I sat back and enjoyed the full tour, using the photos I had taken and hearing with delight about what I had already seen.

You can do it too, from home: ricksteves.com. I preferred to form my own opinions before hearing everyone else’s but perhaps you want do it before you go, to get some context.

Piazza Navona is wonderful. Here is a selfie per Jenni’s request: 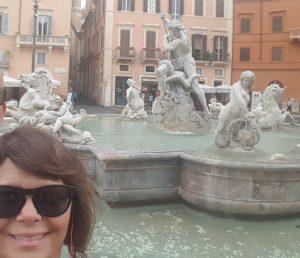 I didn’t say I was any good at it.

We studied the fountains and practiced selfies and enjoyed the group of lederhosen that joined us. There were kilts and wimples and ball caps. We followed them to the Pantheon. Not the Parthenon. Not the Panthenon. It was funny listening to people try to figure it out.

And it is something quite special. I don’t have a lot of intuition or “gut feelings” about places. There are tombs here and layers of religion and history and architectural genius and undeniable art in every stone. But the oculus – the space where there is nothing – spoke to me. Our day was a bit drizzly and the wet came in and made the marble floors slick. The area was cordoned off. I read that during the right time on a sunny day, a palpable column of light forms in the center of the room. 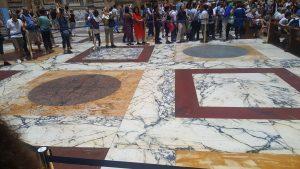 It made me think this:

Here are mans efforts over the ages, marching in circles, trying to reflect/create/become/reach something and that Something is this space at the Center. The Light fills the gap and floods down into the arena of souls instead of the other way around.

It made me ignore the beauty around me and admire the Light.

The oculus is the only light source in the building. 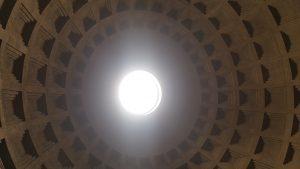 From there we accidentally detoured into Piazza di Pietra and worked our way back to the Piazza Colonna, each with columns worth seeing. We found a shopping mall, cleverly disguised as a piece of Rome and this detour brought us back to the Trevi fountain. Why not?

This day had been pretty fulfilling, but now there was a practicality to figure out: the Metro. We wanted to practice before our Vatican tour in the morning, so we bought tickets in a tiny shop on the corner and headed down into the belly, looking for thugs. Once we decided which direction we needed, it was easy enough to hop on and back off at Piazza Popolo. Efficient, light, clean, and easy to navigate. No thugs in sight other than a grandmother returning from her marketing. I wish SoCal had a metro.

The Piazza Popolo is a spacious place to unwind and it comes with it’s own obelisk, fountains, statues and tourists. There are thirteen obelisks standing in Rome today, many more were lost in transport or invasions. They are legit stolen from Egypt and covered in hieroglyphics.  At some point in history the church decided that they were just a bit too pagan and engaged in a struggle with the townspeople to remove them. Romans were having none of it. Obelisks are cool. In compromise, the church topped each one with a cross to make them more palatable. It’s an odd combination. 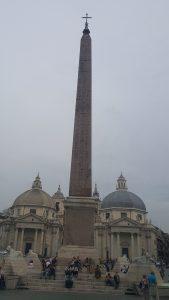 We went up to the little park area and crossed a bridge to a residential side of town. A statue of Pietro Cossa met us there and invited us to walk along the sleepy Tiber. We looked down on riverboats identical to those that Audrey Hepburn danced on. Hmm. A couple of hours later and we might have joined her.

The metro brought us back to home base, and we finished the day in a half-underground little restaurant with a curving brick ceiling, sipping wine, eating risotto with prawn sauce, and capping it off with a creamy dreamy tiramisu. 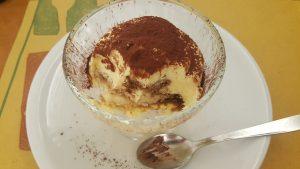 Surprise! It’s been soaked in espresso. 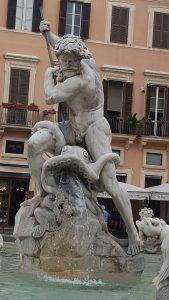 “Trying to get up on a Monday morning.” 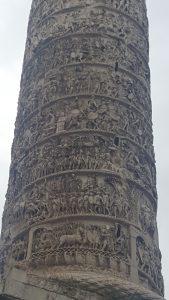 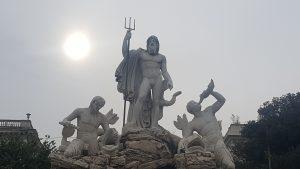 Hanging out in Piazza Popolo. 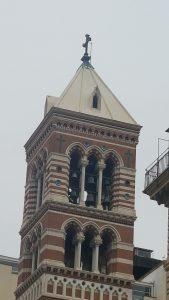 Fancy architecture around the Piazza Popolo, but I love bells! 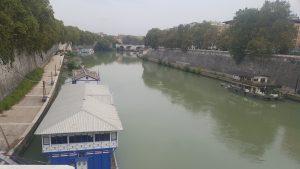 Walking along the Tiber. 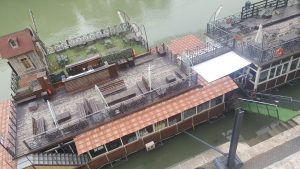 Below are the flatboats for dining and dancing.