On our Italian tour last year, we took trains from La Spezia to Genoa to Milan to Venice, passing Verona on the way. This week for our anniversary, we followed our hearts back. Longing for piazzas, basilicas, and doumos, we decided to revel in the balconies and tombs of Verona and, consequently, the passion, the pageantry, the drama, and the death that is Romeo and Juliet.

I may have mentioned: Italy feels just like home.

I’ve never been to Balboa Park’s Old Globe Theater. Like a star-crossed lover, I always passed by offering terms of endearment and wistful looks but never stopped to embrace it. It was easy to be seduced by Shakespeare. I painted my toenails in anticipation.

I wore the same dress – strictly for the memory – that I wore to the opera in Sorrento. Remember that night? So does my dress. But alas, the pink stilettos from that adventure are no more for this world. I wore the understudy for tonight’s trip to Verona.

Our first stop of the evening was a romantic restaurant on the harbor. I sipped sangria, nibbled chicken salad, and watched the pretty boats sail by on the late summer breeze. In case this was not enough to set the stage, a fat pale moon rose slowly over the San Diego skyline as the sun began its descent in the west. Our waitress presented creme brûlée, a delicately crisped, creamy concoction that curled my toes. A lot. More than average, apparently.

Hand in hand, Hubby and I sauntered from the restaurant, admiring the tiki torches, admiring each other.

“Clomp, clomp, flop,” went something on the sidewalk.

And then, without provocation, one of my shoes decided to throw a fit. “I bite my thumb in your general direction sir!” cried my right shoe.

And in the very next step, the entire bottom of my shoe flew off. Off. The valets and restaurant patrons might not have noticed, had I not burst into hysterical laughter. I had to decide: stop in the middle of the sidewalk and retrieve the errant brick or continue to the car walking like I was on a carousel ride.

I guess I did both. Safely tucked into the car, with no time to spare, we drove to the theater weighing our options. Now, I’ve heard rumors that some ladies keep spare shoes in their cars. They probably keep spare feet in their cars. I am not that lady. Neither do I keep crazy glue nor pliers in my glove compartment. Um, or gloves, now that I think about it.

“What should I do? Can I sneak in barefoot?”

The light turned red. A train went by. Another sigh for Italy escaped me, and we kept driving.

“There’s nowhere to park,” said Hubby, “It starts in ten minutes and we haven’t gotten tickets yet!”

I was bent over what was left of the shoes, still attached to my feet, “Go for it,” I grunted, “we’re doing this!”

Looking neither to the right nor to the left, heads high, we hustled from the parking lot to the ticket stand to the entry to some nice seats…and only then did I take a breath and look down.

These were the ugliest flats on the face of the earth. I traced my finger over one thin strap muttering in Italian. The bright moon rose overhead, lending its glow to the outdoor theater lights, illuminating the stage of Verona. The stage comprised of…a sandbox? I flipped through the program.

All of the actors were costumed to their ankles, and…barefoot. The beautifully talented Juliet sang a rousing rendition of Barry Manilow’s Copacabana. Teenagers brawled in the alleys. Adults marched around telling everyone what to do. Romeo slumped along with his guitar declaring that without his true love, life – hallelujah – wasn’t worth anything at all.

The main characters get married whilst still children.

Nobody really relaxes until they’re dead.

And nobody can figure out what all the fighting was about.

As we gave them a standing round of applause, I recalled my wobbly circumstances. What was a pair of shoes measured against an amorous tryst under an enchanted moon? An embrace on the balconies of Europe with Prince Charming?

Prince C hazarded a quick look at my feet and grimaced as a very unromantic thought escaped.

This dazzling night was going to end where all good affairs end: a serious flirtation with a new pair of glass slippers. 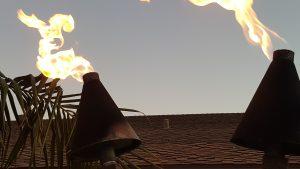 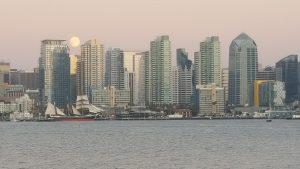 San Diego at the harbor 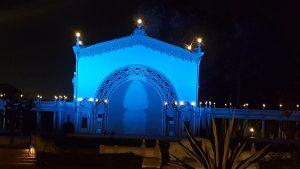 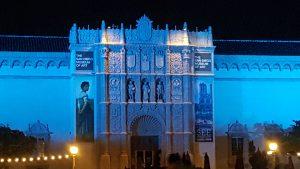 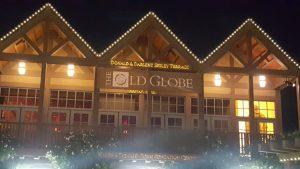 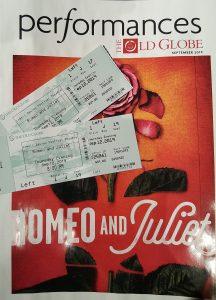 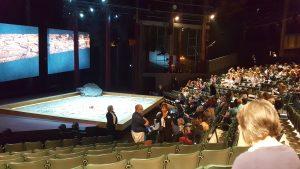