Ah, romance. What else would you make a trip to Seattle for? If Tom Hanks is sad and sleepless and says so on talk radio during Christmas, this intrepid reporter is going to catch the next flight into the land-that-never-stops-raining-shoot-me-now, to cheer him up.

Or at least spy on him. The man is such a great actor, I had to watch Saving Mr Banks again last night, just to be sure. Of course, this time he was in sunny Disneyland where he and everyone else belongs, so life is good again.

The entire clan went to Seattle last week to attend my nephew’s wedding, and so far as romance goes, it was thoroughly done. Roses, harpist, ancient barn venue hung with twinkle lights and chandeliers. The ceremony had people in tears, as did the mini donut truck parked outside. Tears of joy and harmony and hot, cinnamon-powdered sweetness.

After a couple of turns on the dance floor, the newlyweds drove off in a giant truck because, weather. I’m constrained to report that the weather remained outside the building for this event and during the rest of our adventures in the city, and it was our own fault if we went through an exit.

Gloom on the outside, sparkles on the inside.

We’ve explored downtown on a prior trip, so we went to the waterfront for this visit, and discovered the curious, the glorious, and the grotesque.

Grotesque: Bubble gum alley. People, why? My floors were this exciting during the toddler years. I should have cordoned off my dining room and charged admission for viewing. “Move that cheerio two inches left of the grape juice spill next to last week’s bogey. Yes. Perfect.”

Glorious Honorable Mention because my sister said so: The original Starbucks store. I was expecting the Sistine Starbucks and instead found a mall version. It has a brass marker stamped 1971 but no painted ceilings or statues. We should have walked nine blocks further to the Roastery, but we had plenty to work with, right where we were.

Curious: Taxidermy. Life-size wood carvings. The giant ferris wheel for a full immersion weather experience. You can buy a whole fish the size of your arm and the fishmongers will seal it into a “24 hour airplane bag” after throwing said fish around first, tenderizing it for you.

Seattle offers live fish as well, and we spent some time in the Aquarium. This is where we watched a giant octopus work his snack out of a tube and then travel around trying to find snacks in the audience. The kraken is real. We wandered into the underwater dome, trying not to hyperventilate, when I recognized a giant fish overhead.

“That’s a sturgeon!” I said, chasing it with my camera. “I know that one!”

My kids patted me on the head. It’s not like sturgeon can compete with a butterfly fish. But thanks to my author friend, Laura, I am educated now, and yes they can. Next week I will tell you all about Laura and hold a give away of her new book!

The star of next week’s blog!

However. If you sit next to me on the ride home, you’d better not be carrying a flying fish. Or an octopus. Or a prickly sea urchin, which wouldn’t be allowed through airport security anyway, as I discovered. Seattle wasn’t going to let me go home without a little personal cuddle time.

I was the lucky winner of a random TSA security check giveaway!

“I’m going to wipe this little tag over your palms to detect any trace of explosives,” said the lady.

“Cool,” I said, offering both hands. “I never win anything!”

The palm reader flashed red, declaring me a national security threat. “It could also be a lot of other things that aren’t explosives,” she said, “but we’ll have to frisk you down anyway.”

“I’ll be touching your breasts, buttocks, and other body parts that shouldn’t be said out loud. Do you want a private room for this screening?”

“Nah, go for it,” I said, offering up my dignity and a lot of laughing. Pretty bold for a blind date.

I stood with my feet apart, arms out, palms up, and waited to see if anyone wandering by in the airport would notice our shenanigans. Instead, while the lady checked for sea urchins in my hair, I caught my sons standing on the other side of the blockade, taking photos, delighted with my predicament. (Later, I demanded the photos for this blog, knowing they were solid gold, and they confessed to “Snapchatting” them, which means they are lost to space and we have only the good memories to prove any of this ever happened.)

“Ma’am, this can’t be taken through security,” said the lady with a righteous frown. She pulled a yogurt cup from my purse. “This is a gel and as it clearly states, right here on the label, is over the 3.4 ounce limit.”

She was so excited to find something amiss, that I let her run with the victory. I offered to help the other agent repack my luggage, but she was having a great time waving my brassiere around in front of everyone and cheerfully replied, “I’ve seen worse.” 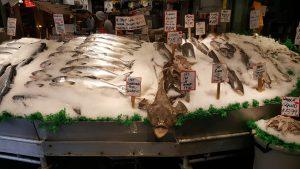 PSA: Fish market door greeter. He’s on a chain and they will make him jump to scare you. You’re welcome. 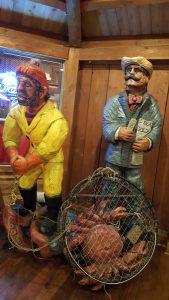 Crab is about right sized. 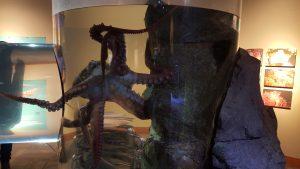 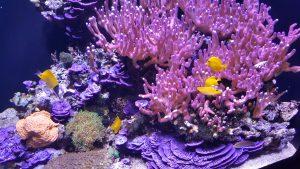 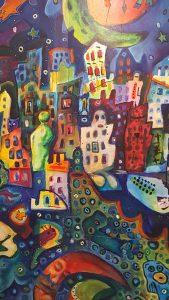