I’m writing you today from the aeropuerto in Cancun, Mexico, although the resort we stayed in lies in Akumal in the Riviera Maya. Hubby has gone to buy a coffee and I’m sitting here surrounded by his luggage at the gate.

I don’t recommend staying in Cancun. From an airplane, it looks like the Vegas strip, only squeezed between spans of lagoon instead of desert. The massive hotels scream “trapped in a teeny weeny bikini and can’t get out!” at me.

You can have it.

About eight years ago, the Hubbs and I spent a week in our first ever “all-inclusive” resort, the theory being that all the adventure you really need on a vacay is wondering which drink to order from the nice lady who saunters past your king-size beach bed with a tray. 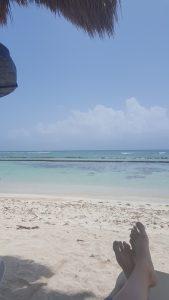 It was a real strain to lift a pina colada to my mouth, thank goodness there was a straw.

Hubby did all the planning this time, chafing for weeks over prices, airplane connections, timing. It’s a mercy he didn’t make our connections on United in O’Hare. He sussed out our resort and read volumes of tripadvisor reviews and had small seizures over getting things at work together so he could actually be gone for a couple days.

Then he packed all his worldly possessions, fretting over the traffic and the weather because somebody had to do it, and by the time we made it via LAX to here (“Jolie, don’t make eye contact and don’t talk to anyone!”) and took the hour long shuttle south (“But, señor, your shuttle is at gate 34!”) to the wrong resort (“I don’t understand, señor, your name is not on our reservations list?”) I was ready for that drink.

They took our luggage as security and plopped us into a golf cart and whisked us away to one of their restaurants, “You must eat here, best breakfast in the place!”

I stepped into an air conditioned food brothel. And the vacation began.

I filled a plate with an omelette, topped it with a fistful of bacon, decorated the edge with kiwi and berries, and balanced some french toast on the side. I hid a vanilla yogurt under the plate because there, at the end of the counter, was a five pound candy jar full of toasted coconut calling my name.

This place was fantastic and I hadn’t even seen the outside of the restaurant yet.

When we finally sat down, the waiter approached.

With a lifted brow, he offered mimosas.

Ya’all, the Mexican garçon brought me tea. The real deal. Brewing in a pot, milk and sugar on the side. Dilmah English Breakfast.

Aye yi yi, I am not leaving this place. (words of spanish ecstasy)

For four days, I pondered decisions like, “I wonder where I’d rather recline right now? SPF 30 or 55? Crab-legs, pad thai, or ribs?”

Although plenty of activities were offered, I got my cardio by leaping into shrubbery every time I walked around a corner and faced: 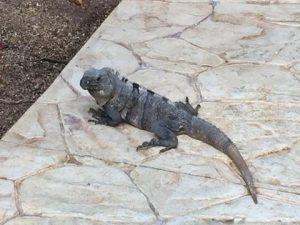 The resident iguanas. Who’re YOU looking at?

They keep the rodent population down and tourist heart rates up.

They own the place, and they know it.

For those of you wondering, I never saw a bug, probably due to the welcome palm-beach breezes. Most of the peninsula is dense, jungly impassable brush and trees. Resorts and towns and roads are bulldozed right through it. I saw laundry strung like banners across flat rooftops on the drive out, and wondered how it dried in the humidity.

You can day trip to the Tulum ruins (where they have plenty of flies) or swim with dolphins or cuddle crocodiles. You can dive in cenotes, or parasail or shop at Sam’s Club.

But my focus on this trip was to tan my muffin top. I roused occasionally to read some Sophie Kinsella or watch Hubby snorkel, but I took a great deal of pleasure from the fact that I (unlike the honeymooners across the way) have no use for perfection or posing.

I had packed a hair clip and a tube of mascara to be fancy, two swimsuits, and a maxi-dress.

This explains why, when we had to catch our shuttle home, I had plenty of time to order a nice lunch while Hubby was running in circles trying to repack twenty outfits and four pairs of shoes.

I downed my last pina colada as we bustled into the van. Party of two.

It was a nice twenty minutes of peaceful commuting as the driver wove his way through traffic.

But Hubby is an engineer.

And twenty minutes in, Hubby had a question.

“What are they installing along the highway here?” he asked, pointing to miles of freshly trenched shoulder we were passing. The Mexican highway was busy with median work, replanting trees and laying down fresh oil and vinegar. Or whatever. I’m not the engineer.

“The digging,” said my helpful Hubby, “the digging along the road.” He pointed again.

The shuttle slowed instantly, veering into the bike lane (dude. a bike lane) and put on the emergency blinkers.

“You stop here?” he asked as busses flew by, inches from my window.

Realizing his mistake and knowing there was no espanol to save us, Hubby loudly tried to correct it.

The driver looked at him doubtfully, anxious to be of service. It was clear he didn’t know why Hubby had wanted to stop and see the side of the road or why he had changed his mind so quickly, but he sighed with a deep patience borne from years of American passengers and veered back into traffic.

Federalis carrying AK47s were a presence along the highway. Here and there, speed bumps made everyone slow to a crawl for reasons I couldn’t understand. At large intersections, peddlers held kites and water bottles and bags of pumpkin seeds to the windows.

It was slow going.

I leaned over to Hubby. “I need el bano,” I muttered.

“It’s not too far,” Hubby said with alarm, and the freeway slowed to a crawl as yet another speed bump bounced me and my situation around.

Bless Hubby’s heart. He leaned forward and asked our driver for el bano, and the driver’s look said a great many things that even I understood:

“In the middle of Nowhere, Mexico, a gringo needs a bathroom that isn’t a bush on the side of the highway but probably shouldn’t be anywhere else, either, and these stupid touristas can’t go before we leave and can’t wait until we get there and what am I supposed to do about it?”

The shuttle pulled into a gas station ten wretched minutes later. I girded up my loins and ran for it before I could think about the locals loitering on the corner or iguanas hiding behind toilets or diseases on the door handles or the…attendant barring my way?

He unlocked the door to the ladies with one hand and held out the other saying, “five pesos”.

I must’ve had a certain look on my face because he did step out of my way as I hollered over my shoulder to a worried Hubby, “Give him pesos!!”

Now, we had not a single peso between us, but Hubby reached for his wallet anyway, and I am happy to report that it was the best dollar we spent on the entire trip. The bathroom was spotless and reptile-free, and we made it here to our flight in plenty of time to stare at the tarmac and write this.

I suppose if United offers us a million pesos or so to bump our flight home, we won’t be opposed.

I only made it half-way through that jar of coconut.