If you climb a mountain to talk to God, you’d best be prepared for Him to talk back.

With a backward glance over my shoulder, I can see that my writing career has been anything but a straight line. One year in, it most resembles mountain climbing. Lots of crashing through the underbrush and scaling boulders. The occasional rattlesnake scare.

It’s been an adventure and so much fun that I forget to stop every little while and check my compass. 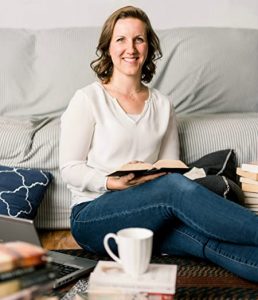 Today, I want you to meet a new author friend, Joanne Bischof. I discovered her in the usual way: crashing through the internet looking for authors who write historical fiction. Her name flew by, and after a couple of curious clicks, I became a fan. One of her books was in my hands, muy pronto.

We had some things in common.

And then I discovered she lives…in actual Idyllwild. Hm. I was going to live in Idyllwild for an entire week at the end of July for our yearly family Bible camp. Coincidence? I think not.

I did something I never do. I emailed a complete stranger and asked if she wanted to meet for coffee and talk writing.

And she said yes.

It percolated in the back of my mind all week during camp, this Friday afternoon coffee meet up. How should I present myself? Could I ask all my questions without taking notes? What if I was too intimidated to ask anything at all? What if she asked me something I didn’t know? Like my name?

Joanne met me at the coffee shop, and we introduced ourselves while we waited for our order. Outside, the sky grew dark and began to spit. Rejoicing in the possibility of rain, we took seats on the veranda at the rail and started talking.

You, gentle reader, already understand the lovely idea of a summer storm in Idyllwild. And its implications.

The wind gusted a bit as we discovered almost immediately that she worked at the very camp I’d been staying at all week. That we’d been together all along, incognito.

The rain began as Joanne told me about a new book she was releasing in August.

Lightning streaked overhead and thunder boomed as I admitted to a new book I had released in July.

“Mine is set in Idyllwild,” she said as the hail began. We dragged our chairs away from the rail.

“Mine, too,” I said. “It has, um, it’s called Summer Storm.” The heavens opened. The streets began to flood.

“I had to do a lot of research for it during Covid,” Joanne said. “On this area, on 1902, on the Cahuilla, on the first settlers. Hard to do when you’re trapped at your desk.”

“Did you know there are a couple of abandoned gold mines up here?” she asked.

This is when we moved our chairs up against the building and the wind blew so hard we were getting wet, anyway. Our coffee date had passed its polite expiration, but we were trapped at the coffee shop by a storm that raged for two hours solid before easing up. Plenty of time to ask all the questions, exchange all the stories, and for the shocking amount of coincidences to soak in.

Because, of course, I’d just had a week of classes to remind me that there are no coincidences. I took the opportunity to reset my writing compass to true North. Reminded myself to see the forest instead of constantly running into trees in my haste. She showed me a gentler way to author.

When it was finally safe to swim to our cars, Joanne promised me an advance copy of her new release, The Gold in These Hills. It arrived today and I’m passing the excitement forward and giving it away to a lucky blog subscriber!

Visit Joanne on her website anytime, enjoy one of her videos here, and follow her on all the things.

To enter a drawing for this copy of her new book, drop a random fun fact from one of my books in the comment box below. You know, like the name of the mine where Red lives. Or something. Ahem.

Entries accepted through September 9th at midnight and I will announce the winner in the newsletter on September 23rd. (You do get my newsletter, do you not?) Winners must provide a continental USA mailing address to claim the prize.