The Big Uh-Oh is the birthday immediately preceding the Big Five-Oh. The one where you’re going along in life, minding your own business and then boom you have an epiphany in the dressing room at JCPenney’s.

Your mother was right.

We are not going to call and tell her so.

Several choice words escaped my lips before the woman in the mirror threw all her clothes back on, tossed the bikini into the discard pile and marched over to a rack of colorful muumuus. Tossing one over my arm, I marched to the check-out, leaving a trail of epitaphs.

It’s my birthday and I’ll lie if I want to.

Now, it has been two months since last we talked, and I may or may not have been up to my unwaxed eyebrows in occupational therapy that included authoring “Self-Training for Upper Admin in 500 Easy Steps, All of Them a SECRET”, but I’d be ding-danged if I let this birthday just wander by without a direct confrontation.

The Big Uh-Oh landed on a Monday. I took the day off from my super-fun job and called in the troops. In precision formation, my two sisters hopped in the car and we drove far away to a place where no jobs, men, or kids would dare follow…a day spa.

When you turn the Big Uh-Oh, you get a bucket for your birthday, and all your “things I’m going to do some day” are in it. Every year thereafter, you are honor bound to pull a thing out and go do it. It’s the rules.

This day spa was on top of the pile. It’s like Disneyland for moms and yes, you have to pay just to walk through the gates.

“Taking the Waters” is on the same level as “Taking a Nap”. How much effort can it be? But this is a place of natural hot springs, sunshiny lounge chairs and breezy palms. So we decided to take just as much waters as we could.

On your birthday, you get in free.

If you purchase a spa treatment.

Wielding my credit card like a royal scepter in the fancy lobby, I ordered a hot stone massage and a ticket for the slime cave. We walked into gleaming locker chambers that segued into echoing lounge rooms, marbled shower rooms, mirrored powder rooms, curtained changing rooms, ending in a private Roman bath house.

This place was no joke.

There was a right way and a wrong way to “take the waters”.

When you cook a frog (so I’m told) you submerge it in a pot and turn the fire on low.

“This isn’t so bad,” thinks the frog, “It’s rather nice actually.”

And he gets comfortable.

This is how “taking the waters” works.

First, we submerged in geothermal sulfur pools, muscles relaxing into mush as we sipped ice cold lemon water and stared at the sky in bliss.

After twenty minutes of steaming our pores open, we crawled out to do the next step: detoxification.

At the swim-up mud and mister bar, we lathered red clay into our skin and hair. We made some pottery. Completely covered in mud, we toasted on a lounger until everything dried. 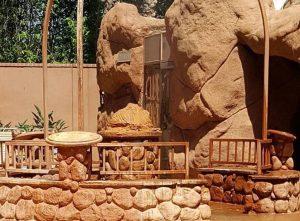 I’m sorry to report that it was heavenly; mud cracked into old leather on my face and gloppy baked warts stuck to my back.

The feeling was mutual, because the mud wouldn’t come off without a fight. This is why we packed two swimsuits. We went to change and then fell, exhausted, onto shady chairs.

But there was more to take. 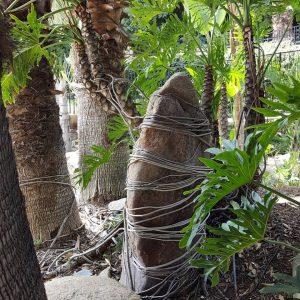 In another part of the complex, overgrown with lush greenscape, Happy Hands Harry systematically took me apart and put me back together again.

My frog was cooked.

After the massage, there was a soak in the saline pool. Salt was the only thing floating me upright.

My sisters gathered up what was left of me and marched on to the grand finale.

An elevator dropped us into a series of dim caves. In the first, attendants used a large paintbrush to cover us in a warm combination of shea butter, coconut oil, lavender oil, aloe vera, and alien bogeys. As there was absolutely no hope left for my hair, I went ahead and slimed that, too.

We entered the next cave and nearly fainted from the sauna blast.

“Wait ten minutes before leaving this chamber,” said the attendant as she melted away.

Other ladies reclined in the cavern, meditating or unconscious, it was hard to tell which.

We looked at each other and the giggles started.

“Hey guys,” I whispered, channeling Bill Murray, “He slimed me!”

“I’m not gonna lie,” said a sister, “I will die if we stay over five minutes in here. No way.”

I gingerly stepped to a ledge and sat down. I finger-painted patterns on my legs. “Look,” I said, “henna tattoos.”

We tossed her another towel and ladies around us began to leave.

“It’s only been three minutes!” said another sister, “I can’t breathe!” She began to pace, which, considering the place was wall to wall slimy, seemed like a bad idea.

The grotto was softly lit with green tinted lights. “Yo ho, yo ho, a pirate’s life for me…” I sang softly. We were going to be skeletons in the corner in another five minutes.

Finally, the time was up. We poured through the heavy door into life-giving oxygen. Showers removed *most* of the slime and, swaddled into towels, we moved into the cooling chamber. Here, we helped ourselves to tea, ice water, and fresh green apples.

My sister stood, gasping, under the air conditioner vent.

We lounged in the cooling chamber, discussing birthdays and families, holidays and hairdos.

Topside, we sauntered back into the locker rooms. We followed the labyrinth all the way to the Roman bath house; the only thing we had not yet tried. Five minutes was all we could take for those waters. As a matter of fact, if you had offered us one more water to take, we would have, in a very lady-like fashion, tossed it back in your face.

Our skin, however, was soft as a newborn piglet.

As you exit the day spa, you have the option of walking the meditation maze. You mindfully follow the circling path, moving to the center, where your soul is found.

We made it to the middle and I thought: 1. it took a lot longer than one would have guessed to find your soul and 2. I couldn’t decide if the little rocks perched on top of the big rock were souls and I could choose one or whether the big rock supporting all the others was a better representation of my soul.

My sister just stood there staring, and said with a shrug, “Is this it?”

I left the Big Uh-Oh in the rock pile to ponder the Big Five-Oh.

I will call my mother and tell her she was right. I’m getting…vintage.

She’s too distracted by her own imminent birthday: the Big Oh No. 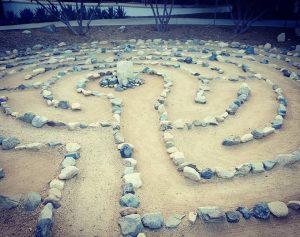 As my dad keeps saying, “There are no straight lines in the Universe.” Whatever that means…