Many know the legend of the curse that follows those who dare disturb the sarcophagus of Toot-in-Common. Few have dared to approach it. None have dared to open it.

For many years, people circled the area, knowing that foul deeds and fouler air were contained in the bowels of the ancient tomb. What treasures must be locked away in there? What mysteries hidden in the depths of the forbidden zone?

One intrepid archeologist risked her reputation and her life by venturing where no man had gone before. Well. A man or two had obviously gone before her to build the thing. And yes, what they buried involved another man who should have died for the plan to work. Somebody somewhere had to curse the thing.

But we’re getting ahead of ourselves.

There were strange markings in the walls that she couldn’t decipher. Patterns in the tiles plastered above the cavernous entry. Mold grew in the corners in a black spidery gesture that unmistakably beckoned the wary explorer to come closer. She looked carefully for a trap. There was nothing here that could sustain life. The smell was a mixture of damp clay, stale air, and sewer slime. The floor shifted with her weight and creaked. The wind outside moaned in warning. In the dim light, she stepped closer. The sarcophagus was buried here in the dry rot. She could feel it.

Waving to her team of hired thugs, she moved into position. She put on gloves, a mask, and protective eye shields. On her signal, hammers fell against the stone that encased her prize. She reached for ear plugs. Shrapnel flew through the chamber, filling the air with dusty debris. “Stop!” she cried, lifting a fist. “Time to use the chisels.” With detailed precision, the last of the stone was chipped away, revealing the edges and smoothly polished target of her ambition.

“Yes,” she said, running her gloved hand over its alabaster surface. “You’re mine.”

She turned to look behind her. There were three intricately carved storage chests. Taking up a mallet, she smashed through the front panel of the one on the left. “Empty!” she cried in frustration. She broke open the one on the right. There was nothing inside but a cracked cistern, oozing thick, black offal. She backed away quickly, signaling to the minions to cover it up. With one last desperate swing, she cracked open the central box. She moved her boots out of the way just as odd shapes and parcels began spilling at her feet.

“Bag it,” she said. Time to sort her treasures later.

Circling slowly, she knew what she had to do. Others would hear about this as soon as she left. They would follow, curse or no. The credit was hers and hers alone. She would remove her prize and destroy the place behind her. She took photos first. Proof for those who might scoff later. A tease for those who hadn’t been brave enough to go after it themselves. Cowards.

Workers lifted the huge sarcophagus from the bowels of its encasement and gingerly moved it towards the entry as others took up hammers again. “Level it,” she said, and took the first swing. The cavern wall opened immediately, gaping wide as huge chunks fell away on their own. Through the rubble, black slime began crawling from hidden recesses above the ceiling and down into the room. It percolated from the holes in the floor, bubbling up in anger. The alluvium of a thousand years rose to challenge the intruders and surrounded them in stench.

There, in the wall, was the source of the curse. It pulsed with the remains of a thousand human hands, dripping with stripes of brown, green, and yellow stalactites. A sulfurous decaying mass began to slide towards her. It was offended by the carrion birds who had entered with irreverence to pillage and destroy. The curse had been released and she felt the air hum with its static. They stampeded for the exit. “Bleach bombs!” she cried, staggering towards the fresh air.

Hubby was waiting outside. “I almost died in there!” she said.

“I still might die. What happens when you breathe all that?”

“Leave it alone, I said. We can hire a professional, I said.”

“A professional is who built that bathroom in the first place. A man who did a lazy job with the plumbing and left it dripping for the last 30 years in the wall.”

“Where did you find my hammers? I hid the hammers.”

“At least I got the tub out in one piece.” Kid #5 stood there and pointed to the dings in it. She tried not to feel defeated.

“I hope you’re happy. The bathroom’s destroyed. Now we have to rip out the mold and it goes in every direction.”

“Yes, I’m happy. The place is like death in there.”

“Please don’t touch the toilet. What did the toilet ever do to you?”

“Toot-in-Common can stay. It’s the only thing that worked right anyway.”

“Thank goodness for small blessings. I’m not good with rivers running through the house.”

“Well,” she said, “at least I can find out what’s been falling behind the cupboards for the last million years.”

I might just light the thing on fire and rebuild from scratch. I mean. She might. She’s a crazy archeologist with a torch, you know. 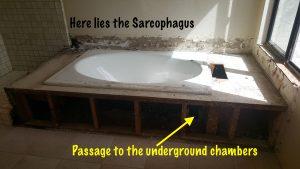 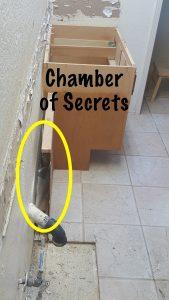 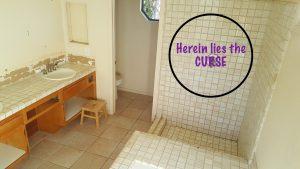 Don’t open this. You were warned.