The arrivals section of the Roma airport is crowded, dirty, extensive, and confusing. The passport line was hidden, the customs area was vacant, and I finally found a bathroom, leaving Hubby to guard our belongings and breathe into a paper sack.

We had planned for this first-day nonsense and arranged a shuttle from the airport to our hotel. As we were neither driving nor messing with taxis in Italy, this was a comfort. Our driver met us at the gate, commandeered my luggage, and led us through a maze of corridors.

Hubby fell into the procession as caboose and immediately had his first encounter with pickpockets. Of course, he was prepared for this. He had a manly money belt strapped onto his waist and a manly fanny pack strapped onto his luggage and a manly stink-eye for anyone who dared to move into his personal space. The three suspects got cozy with him for a minute and then moved on to prey on helpless widows and orphans.

Which was a comfort.

LaDonna commented “have fun and be safe” but little did she know how both were combined in the name of pickpockets. Hubby asked me every five minutes for fifteen days whether I “still had my effects” and he insisted on playing his own cards tight, although it made checking in to hotels a colorful event…concierge politely requesting passports and Hubby reaching down into his pants to retrieve them.

We sat in the sleek black car and tried to relax as our driver pulled out into the Italian sunshine. He chatted nonstop about what to see in the city, about his daughter who packs much larger suitcases than I do, about my sad hash of the Italian language. Cars drive on the right side of the road, at proper speeds, with proper traffic signs. We could have been entering Dallas or Murrieta; same terrain, same random housing and business or industrial bits here and there.

But then we took an exit and right in front of me was an enormous ancient wall. Enormous. Ancient. As we drove by, burnt umber ruins peered through cypress at us, unflinching with arrogance or indifference, I couldn’t tell. Locals passed by, oblivious to the stones. We turned and drove past the Circus Maximus. Across the street, Palatine’s personal palapas stared down at us and I wanted to leap from the car and run a lap on the spot. I was an excellent charioteer in the third grade.

There was no mistaking that we had entered another space entirely.  Our hotel was on tiny one-way Via Torino close to the Piazza della Repubblica with her randy  fountain. After checking in, we went out to get our bearings, a good habit we did with every city thereafter. It feels dense and green and gray and rippling inside the Aurelian Walls, like standing in a waving flag. Rome has the pulse of a runner and it makes you breathe a little faster, lean forward, and prepare to do a thing.

Traffic in Rome is a writhing basilisk. If you know the proper way to approach it, it won’t hurt you. Double-decker tour busses, determined taxis, businessmen in three piece suits on mopeds, women on bicycles, all intertwine in the piazza, dancing around each other and the pedestrians who dare to join them. They slide past with a generous two inches to spare, with both a smile and a frown: “No hard feelings man, I have somewhere to be.”

There are no stripes on the cobblestone streets. Traffic lights are tolerated. A red light is an opportunity for four lanes of traffic to become six during the pause. They are so accustomed to pedestrians – aka clueless tourists – wandering into the road, that they compute it into their driving pattern and time their approach to the pace of the moving person.

If your mind is made up to cross a street, step deliberately and swiftly. If you hesitate for approaching cars, they will be super confused and crash on the spot. Try to step in behind a local lady pushing a baby carriage. Italians have great respect for moms, so you will be perfectly safe. Also, Italians have great fear of them. I watched a nicely dressed middle-aged woman launch a stream of violent curses at a man on a bike in Florence who came too close for her comfort. I then spent a half hour in delight, listening to her ongoing opinions of his family as she continued down the street and his loud mutterings of innocence as he pedaled slowly away.

We found Bernini’s Triton fountain first, taking a few polite photos. All of ten minutes later, we put the map away and went rogue. The city tempo makes you lift your head, paw the ground, and look for something to climb, which is easy as the streets are narrow and wind around and go up and down hills. We went up one and bought our first gelatos: pistachio and mango. We went up another and found the obelisk at the top of the Spanish Steps. We puzzled at Bernini’s Boat fountain (Is that it?) at the bottom, then found another obelisk that was surrounded by Moses (which makes total sense when you think about it), then wandered downhill and saw a tunnel which we had to go through because something awesome was probably on the other side. We worked our way back down Via Nazionale and wandered up to Piazza de Quirinale.

Happily, Rome is smaller than it looks on the map. We headed for the Trevi fountain. It was all we wanted it to be and more. The tourists that pack in are entertaining once you aren’t worried about pickpockets. A lady walked out on the fountain for a photo, the permanent police patrol blew a whistle and scolded her back. She just smiled and shrugged and I wondered how much longer the public would be allowed to get near it. We did the coin toss thing for Becky, just in case.

There is a less crowded area to the right of the fountain, where you can walk up and fill your water bottle.

This is an important thing to know about Italy.

The water is drinkable and available and free. There are fountains of varying decorations along the streets, even in tiny obscure towns. It’s foreign to America, where you pay for water but the bathrooms are free. Here, the water is free but you pay to pee. Hubby filled our bottle and drank. I watched and waited for another hour to see if he would keel over. After that, we had free water on all of our adventures.

We finished our day with pizza, back on the Spanish Steps. It was dusk. The tourists were mostly gone and a bride and groom posed for photos in the golden light. Suddenly bells began to ring the solemn strikes of seven o’clock. Lamps flickered on and the city gave a sigh of contentment. Of a day well run. A kiss. A slow stroll back to our hotel, holding hands under a rising moon.

The Piazza della Repubblica is a show to itself. 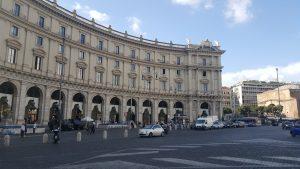 Our scandalous fountain history  is fun to read.

When you look down the street and see…. …an obelisk at the top of the Spanish Steps! 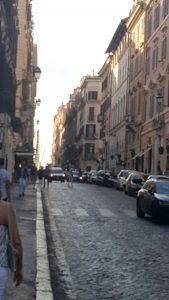 And the fountain at the bottom gives you a sinking feeling… 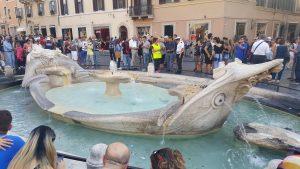 Don’t be fooled. We are standing in an ocean of humanity around the Trevi Fountain here. 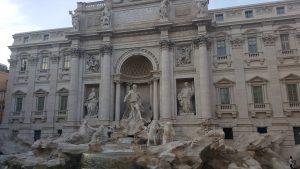 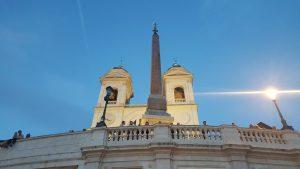