Spinning and spinning at Dizzyland…

I haven’t visited the Magic Kingdom in at least a dozen years, when I was surrounded with kids and baggage and baby wipes. When I spent the day slathering sunscreen onto wildly waving body limbs and handing out fruit gummies to dodge the imminent threat of spending five dollars for an ice cream cone that would not last the wait in line to the next ride that two out of five kids didn’t want to go on, which didn’t matter because the baby STILL wasn’t tall enough to ride, which meant I was going to stand this one out regardless…..

Hubby splurged that year and bought family passes. They got us in four times, but not on weekends or holidays or Spring Break or months ending in “y”.

And still, it was too much.

Last week, I used Park Hopper Passes – courtesy of my employer – to take my sister and I back to the Happiest Place on Earth.

As we both carry battle scars from previous visits, we kept the jumping up and down with glee to a bare minimum, and made a firm pinkie promise: this time was going to be different.

There would be no dashing madly, elbows flying, between rides.

There would be no baggage: no strollers, no totes, no jackets “in case it gets cold” or hats “in case it gets hot”, no cameras or video recorders, no toys for when we’re bored in line, no grocery-store-in-a-backpack if one of us starts screaming for a giant lollipop shaped like Mickey.

There would be no whining. If we wanted to spend twenty minutes in a shop staring at Mickey ears, we would. If we wanted the dang lolli, we were – understand this – going to buy it.

And not share even one lick with anyone else in the whole world.

There would absolutely positively be no waiting in line for a ride we didn’t want to ride. We would avoid Mr Toad’s Wild Ride and Tom Sawyer’s Island and why do they even keep Autopia? Toontown and the “tune” that lives next to it: definitely out.

The LA freeways, true to form, were once again under construction and what map quest said and what the patched up freeway signs said were totally different things.

We ended up trapped in the HOV lanes, going lickety split past appalling traffic. We could not get out, and as each sign warned us that we needed a transponder (whatever that is) and to have at least three people in the car (say what?), we had several rounds of hysterics before finally escaping. It easily replaced the Radiator Springs Racers, which weren’t racing that day.

We practiced our Thelma and Louise by going on – hands down – the scariest ride there: Soarin’ Around the World. There was nothing about the boring wait in line to indicate that we were about to wet ourselves. No screaming or thunderous roaring from inside.

You sit in a row and get lifted maybe ten feet off the floor. You are surrounded by an IMAX theater screen and an overhead panel that customizes what you are about to do: jump off a dozen cliffs around the world and hang glide over breathtaking beauty.

When you swoop down over a herd of African elephants, you can smell the earth and the trees and feel the wind in your hair. When you glide above the Taj Mahal, you can see every tile and smell fresh jasmine. When the whale breaches right in your face, you are spritzed by water.

When you climb up to the top of the Eiffel Tower and leap from it, you scream like a little girl and close your eyes and grip the handles and your sister thinks it’s hilarious, all of ten feet up.

Whatever. I need my feet on the floor.

In return, I made her ride the Disneyland Railroad all the way around the Park. She had never done that and it was my secret weapon back in the day. You can ride it as long as you want, and we ate Dole Pineapple Floats and cheered the old school dino animatronics.

We took the Jungle Cruise for old time’s sake and it occurred to me that I missed my calling as a tour guide comedienne. You can keep your Disney princesses; my fantasy is that you can be paid to tell goofy jokes all day.

When you can’t put your cellphone away for the night…

We lounged around New Orlean’s Square, visiting Pirates of the Caribbean and Haunted Mansion twice. We were happy to be running away on the Big Thunder Mountain Railroad and even happier to hit light speed on Star Tours.

The fantasy came to a halt at Space Mountain. Someone had forgotten to turn on the light display inside, and the ride was entirely in the dark.

If I wanted to be in the dark and jerked around randomly and come out feeling confused and vaguely nauseous, I could’ve stayed home.

We wrapped the day up nicely with dinner in the Blue Bayou, a place harder to get into than an old pickle jar. We sat in the Louisiana twilight, watching boats drift by, and ate lamb and steak and fresh bread that made your eyes glow like fireflies with delight.

We spoke of treasures and teacups, castles and carrousels.

It was a whole new world, going to Disneyland without the fam.

A smaller world, perhaps, but one glittery with pixie dust. 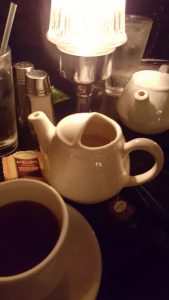 Tea at the Blue Bayou…so so so nice.